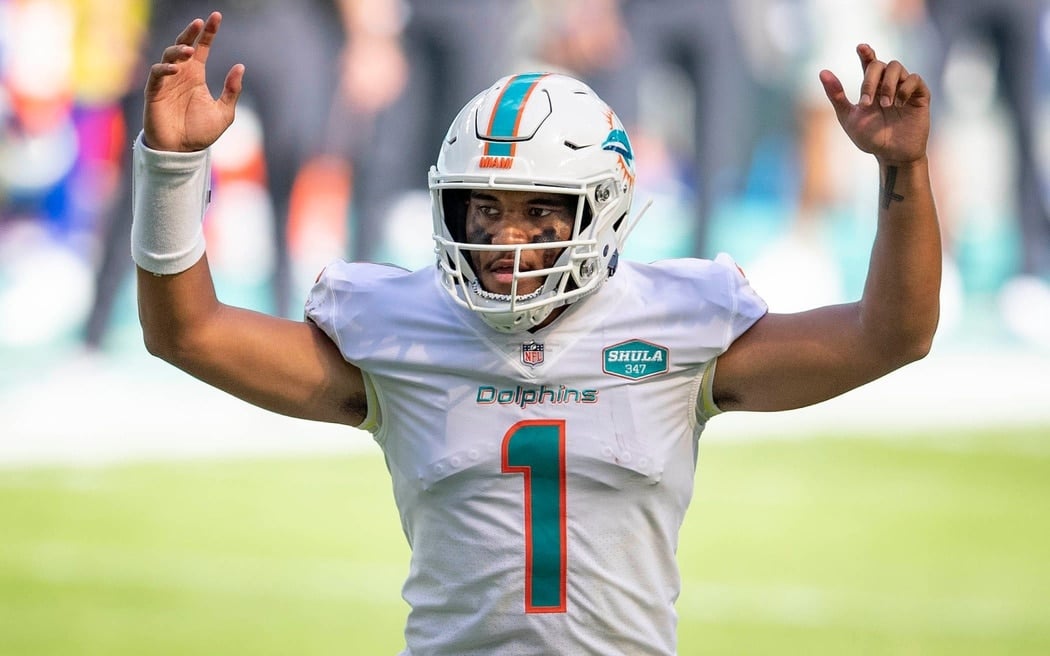 Week 7 was a bye, with the Dolphins at home getting ready for the L.A. Rams.

In Week 8, Miami beat the Rams 28 – 17. We watched this game and saw L.A.’s QB Jared Goff throw an int. in the first quarter on his own 27 and Miami scored 7. In the second quarter, the Rams fumbled, which allowed Miami to run the ball back 82 yards for a score. Miami then held and returned a punt 87 yards for 7 more. Poor Goff finished out the first half that resulted in an additional 7 to make it a 28 to 10 half time lead for Miami. Tua finished the game 12 for 22 with 93 yards and a fumble.

Week 12: He was out with a jammed thumb.

Week 14: KC was in Miami and the game was never in doubt, despite Mahomes throwing 3 rare interceptions. Miami could not run and managed to grind out a meager 80 yards in which Tua had 24 of them. The final score was 33 – 27 but the game was far from close.

Week 16: The Dolphins were in Vegas to play the Raiders and once again Tua was benched with over 8 minutes to play. The Fins came back to win the game 26 – 15.

Week 17: Ryan Fitzpatrick was out of the game due to a positive result on a Covid test and the Dolphins were playing in Buffalo. The Bills needed the win to secure home field game in the Playoffs. The final score was 56 – 26 and, coincidentally, this was one of our biggest picks of the year.

As we look back on Tua Tagovailoa’s first season with the Dolphins, we are going to call it a D+ to C- year. The team played very well on defense, however Tua was benched against the Broncos, the Raiders and thoroughly beat by both the Chiefs and Bills down the stretch.

The other 4 games he was in were, at best, average. He won against the Rams who had -28 points in 4 amazing turnovers. The win against the 2 – 7 Chargers was not as close as the score indicates. The Bengal game saw Tua complete 26 out of 39 passes, with Miami’s defense shutting the Bengals down. The only score by Cincinnati was in the 1st quarter on a 72 yard pass. The Patriot game was a chess match between Belichick and Brian Flores. Miami won out as the Patriots could not stop the run and force Tua to throw. Tua was 20 for 26 and 145 yards.

To us he is still a rookie QB with little experience. In college, he was a first year back up. He played well in his 2nd and 3rd year but accumulated 3 sprained ankles and a broken hip. His senior year never happened, as he entered the Draft and Miami took the bait. Let’s see some more from Tua before we jump up and sing “Miami Dolphins, Miami Dolphins, Miami Dolphins Number One!”